About our parents’ day out …

One day, not too long ago in November, during the week of Thanksgiving here in California, my husband and I both happened to be off work. The sky was blue, the air cool and the weather sunny. The little one was off at daycare. With glee that rivaled that of a school kid’s at the start of a holiday, we piled into our car to steal a few glorious hours away from the full-time job of parenting.

Although only about an hour’s drive from where we live, I couldn’t remember the last time I had been to the destination we were driving to. The place felt like an old acquaintance, someone with whom you recall fun times but who you haven’t met in ages. The city that is home to a bright, iconic bridge, with roads that climb and dip along crazy, steep inclines and with dwellings layered thickly together like decorated cupcakes beside the Pacific Ocean. San Francisco!

I wanted to go to a location with a nice view of the Golden Gate Bridge, especially in the cooler season in November, when it can be viewed in its entirety, without the fog playing spoilsport as it often does during the summer months. We decided on a drive through Half Moon Bay, along the Pacific coastline and this turned out to provide half the enjoyment in our outing.

Since it was a weekday and non-peak traffic hour, traffic was sparse. The music system in the car remained switched off. We were tuned into our own private communication channel, one where we were able to complete entire sentences at a stretch for a change. No half-sentences to each other left dangling in the air while getting constantly interrupted by a toddler. “Hey! Don’t put that in your mouth!”, “Don’t step in the mess, let me clean it up first. Wait, please!”, “Did you hear what our little girl said just now? Wasn’t that cute?” or “Oh! Don’t throw that, it’ll break. Don’t! Aaaaahh…” No more of “wait, what was I about to tell you? Gosh! I forgot about it when she started yelling …”

The surroundings at the side of the road had started to turn green with the first few rains of the season. After a pleasant drive through the mountains, a stretch of blue began gleaming in the distance towards the sides. My nose caught a whiff of a familiar salty smell. Hmmmm. The ocean was close by.

We reached half moon bay and instead of turning in for the route into the main town, we continued ahead towards our final destination. The coastline began to race alongside our car. My husband, who was sitting in the passenger seat, pointed out a spot in the distance to stop the car and spend a moment by the roadside, his camera at the ready.

I turned into a nearly empty parking lot that belonged to a restaurant that was closed on that day. The low cliff it was on overlooked a sandy beach. A narrow path travelled along the rim. It was bordered with the bountiful ice plant that grows in most of the coastal places here. We made our way along it and stopped at the ledge. The ocean sparkled under the sunlight and the water came forth in frothing milky waves under a flock of circling seagulls. There were barely six or seven people on the beach below. A woman leisurely walked her two brilliantly white dogs along the water’s edge. Far away could be seen the bulky shape of a cargo ship, right on the horizon. The breeze from the ocean was cold, yet it felt oddly pleasant over our winter clothes. I stood there taking everything in while my husband did what he has always loved doing in a beautiful natural setting. Taking in the scenery through his senses and the viewfinder of his camera.

“Next time, maybe in the summer, we must bring our little girl here! She’ll enjoy playing in the sand,” we planned. A pang of yearning left me pondering at this dialectic – we were enjoying the moment immensely and yet there it was, the unmistakable longing for that little disruptive creature. That’s how it is always going to be, isn’t it? This joyous, crazy and confusing parenting life. There we’ll be, alone or just the two of us. No distractions. And there she’ll be as well, hovering constantly at the back of our minds like a butterfly.

I remember, a few months after she was born, we had decided to grab lunch together during our office lunch breaks – just the two of us – on my birthday. Before entering the restaurant, I had smiled at my husband, “How long do you think it will be, after we are seated, that we’ll start talking about our li’l one?” Sure enough, we had lasted only a few seconds. Then there was the time, a couple of months before that, as I was driving to work on the first day after maternity leave ended. I was talking to my sister on the phone. “Wow! It feels good to be back in the civilized world!” I told her, recollecting the past few weeks that had disappeared under a blanket of diapers, nighttime wakings and frequent nursing.

Anyway, back to the present. We got into the car, reluctant to leave that slice of life immersed in nature from moments ago. The mind had been fed but the body craved nutrition. Time for lunch! The restaurant we found on the way was situated right by the ocean, with waves crashing powerfully onto the rocks by the shore. The colliding water sprayed us gently as we walked across the parking lot. After full bellies, we were on our way once more.

Lands End in San Francisco is just what its name means. The rocky coastline with a wide open view of the blue Pacific stretching out makes it seem like the edge of the world. As we got out of the car, chilly winds assailed us, threatening to penetrate our warm outerwear. Pulling our jackets tighter, we started walking on a trail that ran high along the coastline, with glimpses of the rocky beach and the waves below. But first, we had to fulfill the main purpose of our trip. Stop to take in the full, unblocked view of the Golden Gate Bridge in the near distance, situated admirably at the gaping mouth of the land beside the ocean. 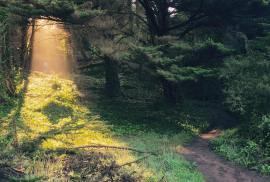 At Lands End, a scene right out of a fantasy narrative

Some photographs and selfies later, we resumed our way along the trail, the windswept cypress trees and other vegetation providing interesting plays of light and shadow. It felt nice to be out in the cold but clear air, getting a bit of exercise for both body and mind.

We turned back much before the trail ended since we had to hurry to beat the evening traffic. However, there was still one more thing left to do. There is this famous creamery called Bi-Rite in San Francisco, rated among the top ones in the US. I had visited it just once before and had fallen in love with the taste that had lingered for far too long on the tip of my mind’s tongue. My pregnancy cravings for their famous salted caramel ice-cream (my new favorite flavor!) had remained unfulfilled. It was time to put this yearning to rest!

The ice-cream tasted as heavenly as I had remembered it to. Sweet creamy goodness melting in my mouth, followed swiftly by subtle salty notes, without which the entire experience would have remained incomplete. And this delectation was taken a step further by the addition of the creamery’s own gingersnap cookies crumbled onto the scoop. All in all, this detour provided a perfect topping on a day scooped onto the already brimming cups of our lives. A day that gave a welcome break to the monotony of daily routine, one that usually contained a very long to-do list.

Everyone needs a break once in awhile and happy people make happy parents. I hope that at least for the immediate few days following our excursion, our kid was able to vouch for that sentiment!