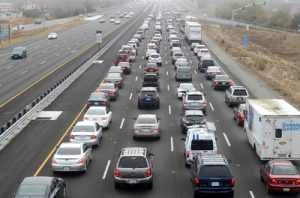 My workplace is around twenty miles away from my home here in California. Fortunately two of my colleagues give me a reliable and convenient carpool option to commute. For traveling to office we take U.S. Highway 101, which carries a high volume of rush hour traffic with delays and accidents sprinkled liberally along its length during peak hours. On Monday evening last week, we made our way home as usual, taking advantage of the comparatively faster moving leftmost carpool lane. The other non-carpool four lanes to our right hand side on the freeway were in motion as well with speeds at around fifty to sixty miles an hour. I was on the backseat chatting with the colleague who was driving. Our third colleague sat next to him in the passenger seat, checking something on her phone.

All of a sudden the car in front of another one in the lane next to ours on our right started wobbling. It began to turn itself in the middle of the road and continued thus, making not one, not two but almost three and a half circles while crossing the lanes to its right hand side. All this RIGHT IN THE MIDDLE OF MOVING TRAFFIC! Sparks flew from underneath it as it performed these antics. To top it all, after spinning like that, the car now became completely reversed, facing the OPPOSITE direction, with traffic coming at it! And for a second or two, it kept moving backward in that state!

The driver somehow managed to turn it around. It started to spin once again, this time, to its original place towards the left. There it came whirling in circles towards us as if in an action movie! In my mind’s eye, I still see all this happening in slow motion – the out-of-control car careening madly towards ours, our driving colleague slowing down and instinctively beginning to lean our car to the shoulder of the road on our left, my other colleague on the passenger seat and I shrieking and the man in that crazy car with his white hair, dark sunglasses and a red and blue shirt coming closer and closer in what seemed like an imminent collision.

Then the car slowed down. Before it could get into our lane and hit us, it lost its momentum and our car passed it safely as we sped ahead on our way. I looked back and saw it finally come to a stop with other vehicles around it decreasing speed and stopping as well.

The three of us in our car erupted into exclamations and shouts as we tried to make sense of what we had just seen. I was so freaked out that I could not even remember what type of car it was. My passenger-seat colleague said it was a Mercedes Class C and added that she had spotted a cell phone in the driver’s hand. My colleague who was driving had seen everything from the start. He put two and two together and figured out what might have happened. The driver, having been distracted by the cell phone in his hand, had begun to drift into the lane on his left, that is, our lane. Suddenly he had realized what was happening and while trying to get back within the boundary of his own lane, had probably jerked the steering wheel too hard. This overcompensation might have caused the car to begin spiraling out of control.

Miraculously, the car had not hit other vehicles in spite of being right in the middle of heavy traffic. All the cars around it had somehow managed to give it enough space while it went nuts all over the place. How we all wished there had been a dashboard camera to record the whole circus! Because the ‘incident’ had not turned into an ‘accident’, we could spare some amusement at it. However, there was a valuable lesson in there – never to use cell phones while driving. I’m sure that every spectator on the road that day, after having been scared stiff, must have been very glad that it had not been a lesson learned the hard way.

My colleagues recounted fascinating incidents they had witnessed while driving in the past. One of them had been inside his car that had skidded in circles in a similar fashion and the other one told us how a car had on the opposite side had crossed the divider and leaped over hers to land on her side. What fantastic tales from the road, dear reader, do you have to share?

Originally from India, I reside in California, where I spend time developing software, feeding books to my two children and submitting my short fiction. View samples of my writing on — https://deeptiwriting.wordpress.com/
View all posts by Deepti Nalavade Mahule →
This entry was posted in Fun, Travel and tagged 101, California Highway 101, carpool, driving, Highway 101, office commute, Us-101 freeway. Bookmark the permalink.